Most manufacturers preset refrigerator temperatures to around 37°F. Chemistry texts list the freezing point of pure oleic acid at around 39°F. Olive oil manufacturers don't generally list a freezing temperature because it is quite variable depending on the olive variety and ripeness of the olive at processing. Unlike the properties of an element or simple compound like water, olive oil is made up of hundreds of chemicals, many of which change with every extraction.

Like most fruit, olives have waxes on their epidermis (epicarp) to protect them from insects, desiccation, and the elements. These natural waxes are what allow an apple to be shined, for instance. If an oil is sent to a cold climate, or if it will be used in a product like salad dressing where it will be stored in the refrigerator, it is often "winterized" (chilled and filtered) to remove the waxes and steparates. A standard test to determine if olive oil has been sufficiently winterized is to put it in an ice water bath (32°F) for 5 hours. No clouding or crystals should occur. 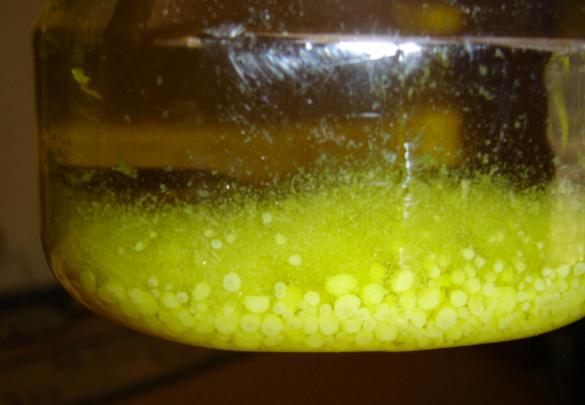 Oil that has not been winterized will clump and form needle-like crystals at refrigerator temperatures as the longer chain fats and waxes in the oil congeal, but the oil will not usually harden completely unless chilled further. Some olive varieties form waxes that produce long thin crystals, others form waxes that congeal into rosettes, slimy clumps, clouds, a swirl of egg white like material, or white sediment that the consumer may fear represents spoilage. These visual imperfections also may form outside the refrigerator during the winter when oil is exposed to cold temperatures during transport. The white color in the hardened oil does not indicate spoilage.

Chilling or freezing olive oil does not harm it, and the oil will return to its normal consistency when it is warmed. The ideal temperature to store olive oil to reduce oxidation but to avoid clouding is around 50°F.

ACTUAL FREEZING TEMPERATURE
To determine the actual freezing temperature, Dr. John Deane put several oils in the freezer with a thermometer. At 40°F, most of the oils had not hardened or formed any crystals. At 35°F, most were firm enough that they could not be poured but were as soft as butter at room temperature. As the temperature lowered, more components of the oil solidified. At 10°F, the oils were hard enough that a fork could not penetrate them. Determining at what point to call the oil "frozen" is a matter of semantics. This slow increase in hardening as the temperature is lowered is in sharp contrast to a pure substance such as water that switches from a liquid to solid phase at an exact temperature.

Myth: Hardening Proves Extra Virgin Status.
There is a rumor that true extra virgin olive oil, placed in a small quantity in a glass bowl and refrigerated for a while, would become crystalline. A chemically refined olive oil with some virgin oil added to it, however, would form a block when frozen.

At the Olive Oil Source, we doubt that this is a valid observation. While refined or pomace oils will usually be stripped of their waxes, thus making them more likely to form a block, and while it is more common for a refined oil to be winterized to be used in a cheap dressing, many excellent extra virgin oils do not form "crystals". We have watched the production process of many premium oils, from the olive to the bottle, which form a solid block when frozen. Unfortunately, detecting fraud is more difficult than just freezing the oil.

Myth: The Fact that Olive Oil Hardens in the Refrigerator Means That It Is Saturated.
Olive oil is not a saturated fat. All fats will harden if they get cold enough, whether they are saturated or not. As we saw above, olive oil often hardens, but not because it is saturated. It has not been refined as seed oils have been, to remove waxes. The presence of waxes does not make the olive oil saturated or unhealthy, it just means it is a natural product.

As a general rule, the more saturated the fat, the more likely it will be hard at room temperature. Beef and pork lard, margarine, butter, and the saturated tropical fats in cookies, packaged foods, and snack foods are all solid at room temperature. This improves their shelf life, makes packaging easier, and improves "mouth feel" but is not necessarily good for your health.