Olive oil is composed mainly of triacylglycerols (triglycerides or fats) and contains small quantities of free fatty acids (FFA), glycerol, phosphatides, pigments, flavor compounds, sterols, and microscopic bits of olive. Triacylglycerols are the major energy reserve for plants and animals. Chemically speaking, these are molecules derived from the natural esterification of three fatty acid molecules with a glycerol molecule. The glycerol molecule can simplistically be seen as an "E-shaped" molecule, with the fatty acids in turn resembling longish hydrocarbon chains, varying (in the case of olive oil) from about 14 to 24 carbon atoms in length. 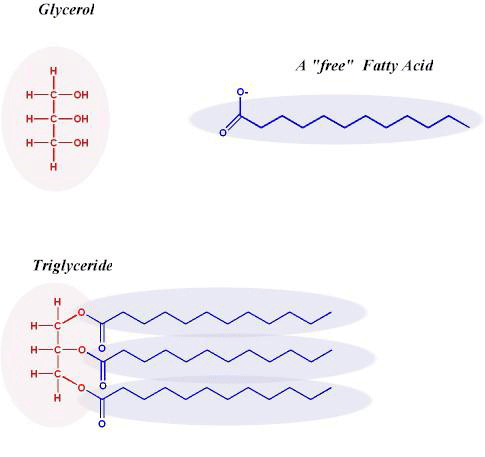 FATTY ACIDS
Please note that we are dealing here with fatty acids forming part of the triacylglycerol molecule. We will address the free fatty acids in the next section. The fatty acid composition of olive oil varies widely depending on the cultivar, maturity of the fruit, altitude, climate, and several other factors.

The major fatty acids in olive oil triacylglycerols are:

Olive oil contains more oleic acid and less linoleic and linolenic acids than other vegetable oils, that is, more monounsaturated than polyunsaturated fatty acids. This renders olive oil more resistant to oxidation because generally, the greater the number of double bonds in the fatty acid, the more unstable and easily broken down by heat, light, and other factors the oil is. It is generally accepted that cooler regions (e.g. Tuscany) will yield oil with higher oleic acid than warmer climates. That is, a cool region olive oil may be more monounsaturated in content than a warm region oil.

Percentage of Linolenic Acid Allowed in Olive Oil
Regarding the polyunsaturated fatty acids (PUFAs), there is a wide range acceptable for extra virgin olive oil, however the linolenic acid has to be less than 0.9% per the International Olive Oil Council (IOOC) guidelines. Higher levels, e.g. 1.5%, do not present a nutritional problem, but the IOOC uses the linolenic acid level to establish the authenticity of the olive oil. Seed oils like canola oil have higher levels of linolenic acid.

“Essential” Fatty Acids
In scientific writing the term essential fatty acid refers to all the omega-3 or omega-6 fatty acids. This is a historical convention, not a medical definition. From a medical point of view, essential fatty acids are the ones that the human body cannot make. There are only two, which are the building blocks from which many of the other omega-3 and omega-6 fatty acids are made in a healthy body: linoleic acid and alpha-linolenic acid.

FREE FATTY ACIDS (FFA) AND ACIDITY
The "acidity" in olive oil is the result of the degree of breakdown of the triacylglycerols, due to a chemical reaction called hydrolysis or lipolysis, in which free fatty acids are formed. (In exceptional circumstances, even oils made from fresh, healthy olives can have significant amounts of acidity, caused by anomalies during the actual biosynthesis of the oil in the olive fruit). Oil extracted carelessly and/or from poor quality fruit suffers from a very significant breakdown of the triacylglycerides into fatty acids. These "broken off" fatty acids are called Free Fatty Acids. Sometimes just one of the three fatty acids breaks off, leaving a diacylglycerol. If two fatty acids break off, we are left with a monoacylglycerol. If all three break off, were are left with glycerol.

Factors which lead to a high free fatty acidity in an oil include fruit fly infestation, delays between harvesting and extraction (especially if the fruit has been bruised or damaged during harvesting), fungal diseases in the fruit (gloesporium, macrophoma, etc.), prolonged contact between oil and vegetation water (after extraction), and careless extraction methods. Storing olives in heaps or silos to encourage enzymatic breakdown of cell structure, and thus facilitate oil release (as is the tradition in Portugal and other countries) is certainly not conducive to producing a high quality, low acidity oil.

The free fatty acidity is thus a direct measure of the quality of the oil, and reflects the care taken right from blossoming and fruit set to the eventual sale and consumption of the oil.

Measurement of free fatty acidity is a very simple procedure which can done at a testing lab. The results are presented as grams of oleic acid per 100 grams oil, commonly known as the free fatty acidity of the oil in percent. Freshly pressed oil, made carefully, without the use of excessive heat, from sound, healthy, freshly picked olives, normally has a pretty low "acidity", well under 0.5% FFA. Extra virgin olive oils have less than 0.8% FFA.

POLYPHENOLS (ANTIOXIDANTS)
The flavenoid polyphenols in olive oil are natural antioxidants that contribute to a bitter taste, astringency, and resistance to oxidation. They have been shown to have a host of beneficial effects from healing sunburn to lowering cholesterol, blood pressure, and risk of coronary disease. Read more about the health benefits of these critical components of olive oil.

Hydroxytyrosol and tyrosol are some of the many phenol compounds in olive oil. There are as many as 5 mg of polyphenols in every 10 grams of olive oil. Many other nut and seed oils have no polyphenols. The polyphenol content is determined by many factors including:

PEROXIDES
Peroxides are the primary products of oxidation of olive oil. Fats and oils such as olive oil are oxidized when they come in contact with oxygen. Oxygen may exist in the headspace of the container and dissolve in the oil. The oxidation products have an unpleasant flavor and odor and may adversely affect the nutritional value of the oil. Essential fatty acids such as linoleic and linolenic are destroyed, and certain fat soluble vitamins disappear. Fatty acids are oxidized by one of the following mechanisms.

Auto-oxidation occurs in the absence of air by reactive oxygen species or "free radicals".  It is temporarily prevented by the natural antioxidants in the oil that absorb these free radicals. When the antioxidants are used up, the oil ages quickly.

Photo-oxidation occurs when the oil is exposed to natural and/or artificial light sources (including halogen lights and store lights). It causes serious deterioration of olive oil, as it can occur up to 30,000 times faster than auto-oxidation.

The more rancid or oxidized the oil, the more peroxides are present. Measurement of the peroxides in olive oil is a very simple procedure which can done at a testing lab. High quality extra virgin olive oils have a peroxide value of less than 10meq/kg. In order to be extra virgin, olive oil must have less than 20 meq/kg.

PIGMENTS AND COLOR
The unique color of olive oil is due to pigments like chlorophyll, pheophytin, and carotenoids. The presence of various pigments depends on factors such as the fruit ripeness, the olive cultivar, the soil and climatic conditions, and the extraction and processing procedures.

According to Apostolos Kiritsakis, one of the premier researchers on olive oil components, fresh olive oil contains between 1 and 10 parts per million chlorophyll. This is miniscule compared to a portion of spinach. Olives are invariably crushed with some leaves still present, so some of the chlorophyll comes from that source. Some producers have been known to deliberately allow leaves in the mill to increase the "grassiness" of the oil.

In the light, chlorophyll and pheophytin will promote formation of oxygen radicals and speed up oxidation, but in the dark chlorophyll acts as an antioxidant. In current physiological studies, chlorophyll is broken down in the body and has no effect as an oxidant or antioxidant.

VITAMINS
Vitamins can be divided into the fat soluble and water soluble varieties. Fat soluble vitamins, such as the ones found in olive oil, are generally not broken down by cooking. They are stored in the liver and body fat for long periods so it is not essential to eat them with every meal. Cured whole olives have both water and fat soluble vitamins.

Vitamin E (a natural antioxidant): Olives have 1.6mg, or 2.3 IU (International Units) per tablespoon. One tablespoon provides 8% of RDA for vitamin E.

Vitamin K: The richest sources of vitamin K are green, leafy vegetables. One serving of spinach or collards, for instance, or two servings of broccoli provide four to five times the RDA. The greener the vegetable, the higher the content, say the researchers, because the vitamin is associated with the chlorophyll. According to the USDA , vegetable oils such as olive oil are the second best source.

POLYCYCLIC AROMATIC HYDROCARBONS (PAHs)
Many foods naturally contain small quantities of PAHs. Olive oil, like other vegetable cooking oils, has been found to contain minute amounts of up to 17 PAHs such as benzanthracene and chrysene. Unripe olives tended to have more than ripe olives.

Burning any cooking oil can increase the amounts of PAHs. This is not considered a major risk source in the diet and the oil would have to be heated repeatedly and for extended periods to the smoking point. It is unlikely that, in home use, olive oil or other cooking oils would be a significant source of PAHs.

FREEZING POINT
Olive oil will harden at refrigerator temperatures - around 37-39°F. Determining at what point to call the oil "frozen" is a matter of semantics. The slow increase in hardening as the temperature is lowered is in sharp contrast to a pure substance such as water that switches from a liquid to solid phase at an exact temperature. Olive oil is a complex mixture of oils and waxes. The heavier oils and waxes will form needle-like crystals as the temperature is lowered, then the other oils will start to settle out.

At 40°F most of the oils would not harden or form any crystals. At 35°F most are firm enough that they cannot be poured but are as soft as butter at room temperature. As the temperature is lowered, more components of the oil solidify. At 10°F the oil is hard enough that a fork cannot penetrate it.

Winterization is the commercial process whereby these waxes are removed to keep some oils clearer when stored on a cold shelf. It is used mostly for aesthetics and to improve mixing when combined into mayonnaise, sauces, and dressings.

Olive oil is a natural product that varies from year to year even from the same producer, so each batch of oil will "freeze" at a different temperature. Freezing olive oil will not harm it; it will actually prolong its nutritional benefits and its flavor. It is a myth that the freezing point of olive oil can be used to predict whether it is pure, virgin or extra virgin. To learn more about this subject, read our Freezing Olive Oil page.

pH
pH refers to the hydrogen ion concentration in an aqueous solution. Olive oil and other oils are not water soluble so their acidity cannot be measured in terms of pH.