When olive oil is too old and has oxidized, it is usually rancid. Rancidity is most commonly detected by taste, but a chemical test can also check for rancidity. The "rancimat" chemical method is mostly used for large industrial frying operations. Oil doesn't suddenly go rancid; it slowly becomes more oxidized and, as it does, the flavor suffers.

Different oils age at different rates. Some olive varieties make oil with more natural antioxidants which resist aging. These oils may be good for up to 3-4 years if properly stored in unopened containers. Other oils, particularly unfiltered oils, may be unpalatable in a year even if stored well.

A two-year old olive oil may taste rancid to some, while others don't mind it. Most people would be put off by the taste of any vegetable oil more than 4-5 years old. Rancid oil has fewer antioxidants but is not poisonous. A good percentage of the world's population routinely eat rancid oil because of lack of proper storage conditions and some actually prefer the taste. In historical times olives which had dropped to the ground or which may have spoiled were made into olive oil which was stored in open-mouthed earthenware vats. Practices like these encouraged rancidity. People have come to expect non-rancid oil in the past 50 years because of chemical refining and better production and storage methods.

Fatty acids are oxidized by one of the following mechanisms:

1. "Auto-oxidation" occurs in the absence of air by reactive oxygen species or "free radicals". It is temporarily prevented by natural anti-oxidants in the oil which absorb these free radicals. When the antioxidants are used up, the oil ages quickly.

2. Photo-oxidation occurs when a double bond interacts with singlet oxygen produced from O2 by light. This can be 30,000 times faster than auto-oxidation.

3. Enzymatic peroxidation. lipoxygenase and cyclooxygenase enzymes are naturally found in plants and catalyze reactions between oxygen and polyunsaturated acids. 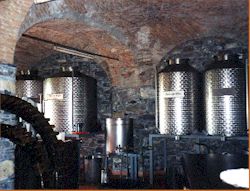