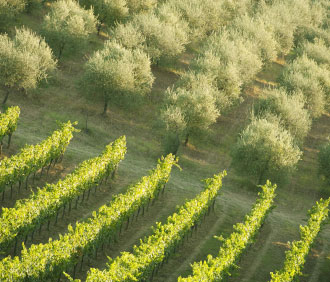 “Partes humani cultus necessariae vinum ... atque oleum olivarum” is as meaningful today as it was in ancient Rome. What, you weren’t a Latin major? Let me translate for you: “The necessary ingredients of civilization are wine and … olive oil.”

Olive oil and wine happen to be two of my favorite topics, both to drink and to discuss. Sharing a similar history, wine and olive oil were vital commodities of the ancient world and were (and still are) celebrated for their symbolic meanings – grapes as symbols of life and renewal and olive trees as symbols of longevity and health. These agricultural accomplices both originated in the same area of Asia Minor and spread throughout the Mediterranean. Olive oil and wine, both considered “gifts of the gods,” found their way into religious observances and today are icons of Mediterranean living.

Earthly gifts with such celestial origins deserve special treatment and respect. Wine and olive oil are similar in this regard. For example, choosing and storing olive oil is a bit like choosing and storing wine. Not all wines are alike! And like wine, olive oil takes on the characteristics of its terroir and ranges widely in quality and flavor. There are other similarities between them and one major difference.

How are wine and olive oil alike?

How are they different?

As early as the first century, historian Pliny wrote: “It is not with olive oil as it is with wine, for by age it acquires a bad flavor, and at the end of a year it is already old.”

It seems as if wine and olive oil have been traveling partners since the earliest days of western civilization. And now olive oil is following the same sophisticated path as wines did a few years ago. Do you remember when we used to buy (or order) either a red or white wine? It’s hard to believe, isn’t it? Today’s sophisticated consumers and diners now request specific varietals: a “spicy Merlot” or “big Cabernet” or “buttery Chardonnay” or name their wine by their favorite vineyard.

That same appreciation and awareness has spread to lovers of olive oil. Knowledge and request for specific olive cultivars (Italian Varietals, Arbequina, Mission) and particular producers of extra virgin olive oil are becoming more commonplace. Selecting the most appropriate olive oil is becoming as important as an entrée’s wine pairing. Pairing of different intensities (mild/delicate, medium or robust) with different foods is becoming part of the joy of fine dining. The day will soon come when discerning consumers will request by name their favorite brand or type of olive oil when enjoying a meal at their favorite restaurant.

Just as wine lovers often take their favorite bottle to a restaurant, I often carry a small bottle of extra virgin olive oil (my own brand or one of my recommended brands) when I go out to eat.

Because when you are just as choosy about your olive oil as you are about your wine … you are truly “civilized.”