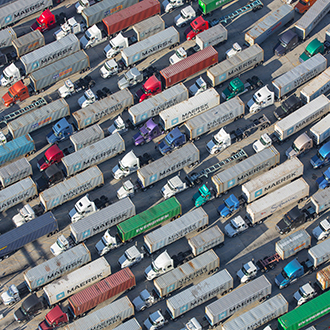 A labor dispute has been taking place between the International Longshore and Warehouse union and the Pacific Maritime Association (P.M.A.) since last May. The union represents the longshoremen who unload containers from ships and load them onto trucks and trains and the P.M.A that represents cargo ship owners. The union’s contract expired last June and the two sides have been striving to reach a compromise on a new contract ever since.

As the negotiations have dragged on, cargo has begun to move more and more slowly though the west coast ports. During the majority of this time, this has meant little more to businesses than delayed arrival of imported goods. Now, however, the dispute is experiencing a crescendo culminating this weekend with a partial shutdown of the Los Angeles and Long Beach ports Thursday, Saturday, Sunday and Monday. This action was taken by the P.M.A. stating they refused to pay overtime for a slowdown of work. The longshoremen get Thursday off as it is Lincoln’s birthday and Monday off as it is Presidents day.

While a partial shutdown of only 2 of the west coast’s 29 ports affected by the labor dispute may appear insignificant, those two ports purportedly handle 40% of the container shipments coming into the U.S. from Asia and 33% of all container traffic in the U.S. Businesses are trying to find alternative shipping routes for their goods such as using gulf ports or air freight but these are not viable solutions in the short term as many companies’ anticipated current inventory is already on the water.

There are a lot of numbers being thrown around with regards to what longshoremen make ranging from as little as $21.00/hr. for entry level workers to an average annual salary of $147,000 with a $35,000 employer paid health care plan and a very generous pension plan. The offers on the table include a significant raise and yet the dispute is still going on. According to the ship owners, the union is demanding the right to change arbitrators when their contracts expire.

The good news for American businesses is that on Saturday, February 14, The White House announced that they would be weighing in on the impasse. Secretary of Labor, Thomas Perez, is headed to California to urge both parties to quickly resolve the problem.

How does this all affect The Olive Oil Source and our customers? We have a lot of inventory on the water at the moment, rather than in our warehouse. Some of our imported products inventory is running a bit low and we are attempting to find alternative sources and shipping routes to cover those shortages. In the short term, due to the significantly higher cost of air freight, some of our products will be slightly higher priced. In the case of even fewer products with high weight to value ratios such as aged balsamics, it is simply unrealistic to air freight them and we will experience shortages until the ports open again. Short-term special pricing requirements will be marked by a red star on products in The Olive Oil Source Wholesale Store. We will reduce the pricing as soon as we possibly can.