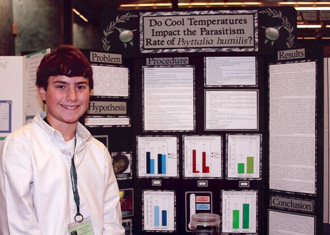 Dr. Marshall Johnson, Paul Vossen and a host of other dedicated researchers at the University of California have a new compatriot in their battle to eradicate the olive fruit fly. Matthew Sorge of San Diego’s Santa Fe Christian School in Solana Beach, has joined their critical mission to help protect the state’s olive crop from the evil fruit fly. 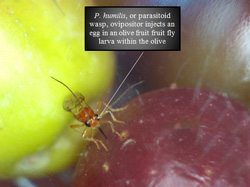 “A biological control is needed to combat the olive fruit fly, because it is threatening California’s $90 million olive industry”, said Sorge. “Psyttalia humilis, a parasitoid wasp, is being released by scientists to control the insect, but there have been problems creating permanent populations possibly because of cool winter temperatures. My project was designed to determine if the cool winter temperatures in coastal San Diego County affect the ability of P. humilis to parasitize the olive fruit fly larvae inside of the olive fruit.” 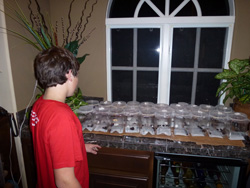 Matthew Sorge conducted his award-winning field research as part of a 7th grade science fair project, but was quick to point out that he was not on a one-man crusade. Assisted by entomologist and mentor, Dr. Marshall W. Johnson of UC Riverside, the carefully controlled study required laboratory samples to replicate work being conducted in other parts of the state. He extended gratitude to scientists that provided sample parasitoids and olives needed to conduct his research, with particular acknowledgement of Drs. Kent Daane (UC Berkeley) and Xingeng Wang (UC Berkeley & Riverside).


What are some of the important points developed in this 7th grader's award-winning field research project?

“Although some natural enemies, (ants, tiny wasps, etc.) of the fruit fly exist in California, none are effective enough to keep the olive fruit fly at non-damaging levels. Even though there are other ways to combat the insect, (pesticides, fly traps, etc.) they are very expensive, time consuming, and can harm the environment,” explained Sorge.

Matthew’s project began with a deep historical summary of the olive and its impact through the ages. His abstract covers a complete explanation of the lifecycle and destructive impact of the olive fruit fly. Supported by numerous academic and industry studies, the paper references many important findings from the best scientists in the world.

As a result, the research won first place at the school science fair and was one of over 12,000 that went through the county fair’s screening process. About 800 projects were chosen to compete in the Greater San Diego Science and Engineering Fair. Sorge won first place in Animal Science and received a professional award from the San Diego Alliance of Rational Inquiry. He was also invited to compete in the California State Science Fair and Broadcom Masters (Math, Applied Science, Technology and Engineering for Rising Stars), a national, invitation only, competition.

Matthew’s mother was understandably proud of his first prize project. ”His affinity for parasitoids began when his big sister did a project in 2007 on the red gum lerp psyllid and a parasitoid wasp that was released in 2001 as a biological control for eucalyptus trees. It fascinated my little boy. When Matthew was faced with tackling his seventh grade science fair project in October, we all knew it would be on parasitoid wasps,” said Jill Sorge.

Most importantly, the research successfully confirmed Matthew Sorge’s suspicions. His hypothesis that the cool winter temperatures in San Diego County can affect the ability of Psyttalia humilis to parasitize the olive fruit fly larvae inside of the olive fruit was proved correct.

Dr. Marshall Johnson concurred and provided the following assessment of Matthew’s contribution to the industry’s effort to eradicate the olive fruit fly.

“Matthew’s project has provided some new information that we needed as part of our (Kent Daane, UC Berkeley; Victoria Yokoyama, USDA Agricultural Research Service, Parlier; Charles Pickett, CDFA, and me) efforts to introduce and establish populations the exotic parasitoid Psyttalia humilis for control of olive fruit fly in the southern California area, “ said Dr. Johnson. “We have recovered P. humilis in a couple of areas in the mid-coastal areas of California (e.g., San Luis Obispo) where we released individuals one or two years earlier. Presently, we are hoping that the parasitoid will start to increase its populations in these areas and make an impact on the olive fruit fly. However, little work had been done in Matthew’s area of the state (north of San Diego) and we did not know if the parasitoid would be able to parasitize olive fly larvae during the cool days of December.”

“Matthew’s project answered the question of whether it was possible for the parasitoid adult to be active and actually parasitize (e.g., locate the larvae and lay eggs inside) the olive fruit fly larvae during December,” added Johnson. “He also shed light on the effect of just a few days of cool temperatures on the developing parasitoid larvae, and we now know from his study that the cool temperatures did slow down the parasitoid’s development from egg to adult as compared to a control group that was held at room temperature. There is still much more that we need to learn, but Matthew’s project does give us hope that we will one day be able to establish populations of P. humilis for control of olive fruit fly (and reduction in severe damage to olive fruit) in the coastal San Diego area.”

From Matthew’s conclusions, it does not appear that he is done with his fight against the olive fruit fly. He recommends that experiments continue over a few winters at cooler temperatures to determine how cold is too cold for P. humilis to successfully parasitize the olive fruit fly and reproduce. Sorge believes that his project shows there is hope for establishing permanent populations of the wasp in Southern California, but until more cool temperature experiments are successfully completed it is too soon to begin using Psyttalia humilis as a biological control.

“Matthew’s findings add one more piece to the puzzle and suggest that it may be possible to adequately manage, but not eradicate, the olive fruit fly over the next several years,” said Dr. Johnson. “His findings give us encouragement to continue releases of P. humilis in the San Diego area. I think he has done quite well for a 7th grader.”

To read a full abstract of this research, click here.